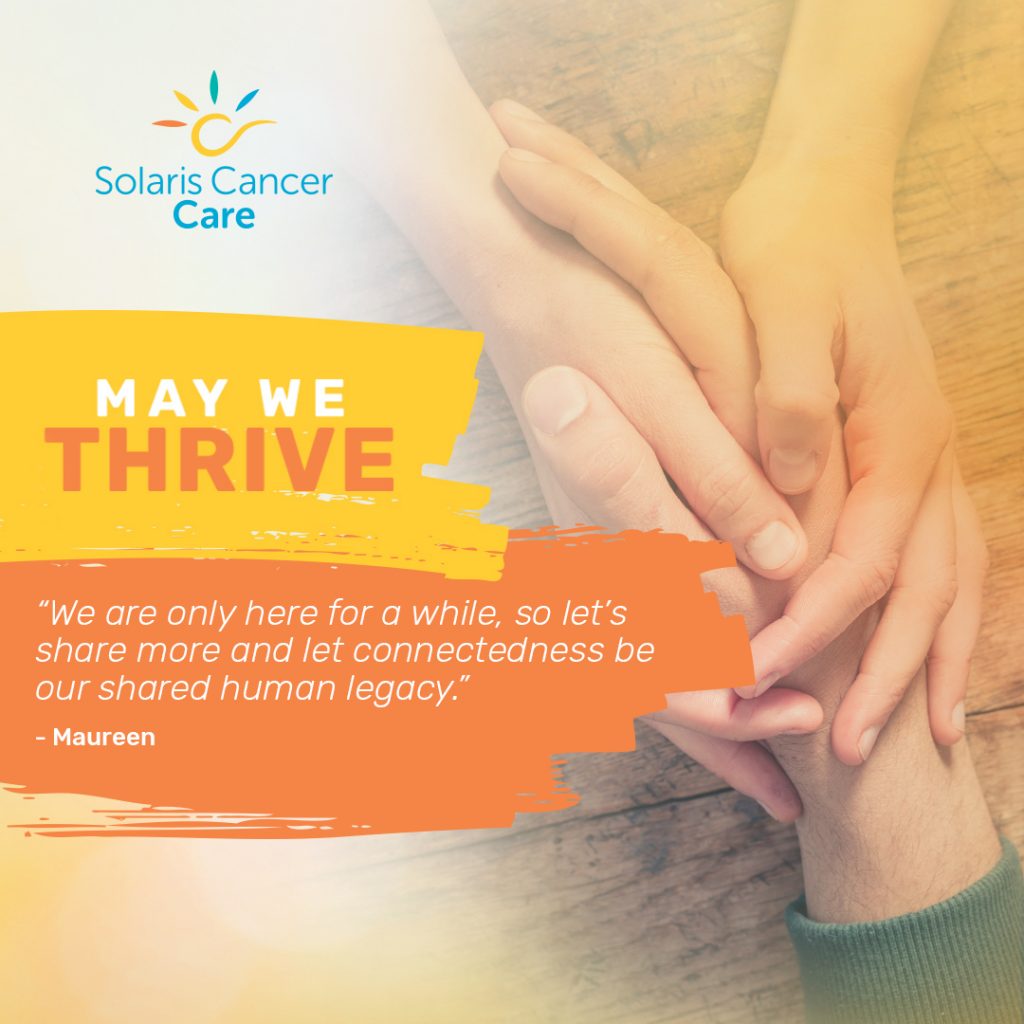 Cancer is a leading cause of death in Australia with more than 44,000 people dying from the condition in 2013.

While that number is tragic, it’s overshadowed by the number of mothers, fathers, sisters, brothers, wives, husbands, sons, daughters, colleagues and friends left behind

“The loss of a loved one is one of the most distressing emotional experiences people face, yet virtually everyone will deal with grief at some point,” said Maureen Tan who alongside Julie Verley facilitate a five-week grief and bereavement course at Solaris Cancer Care – WA’s leading cancer support provider.

The terms bereavement and mourning are closely related to grief, but they have slightly different meanings.

According to Maureen, grief work includes the processes that a mourner needs to complete before resuming daily life.

For Applecross resident Elaine See who attended the course in April after losing her husband Keith to bowel gut cancer, the course helped in a big way.

“I went into the course after losing my husband in January. It was very fresh for me, but I needed to understand the process and get an idea of what I was going through. The course helped hugely because it had a structure, and it gave me an idea of what to expect, including the stages of grief,” said Elaine.

“We usually grieve in the same way as we live, so people who tend to cope during tough times often find that they show this resilience after a loss. This does not mean they are not grieving, but they already have coping strategies,” said Maureen.

If the death was very sudden, or in traumatic circumstances, there may be a sense of things being left unfinished or unsaid. It is not unusual for grief to feel more complicated when this happens.

The condition of complex grief, which is also called prolonged grief disorder, affects about two to three per cent of the population worldwide. The condition is characterised by intense grief that lasts longer than would be expected according to social norms, and that causes impairment in daily functioning.

“From the research I did, depression and suicide are not higher for populations who are dealing with grief and loss.

“Having said that, the rate of depression rises sharply for a percentage of this group who are identified to be experiencing complex grief.  Complex grief is interwoven with some level of trauma, and the reasons for that are varied – briefly, it could be a complicated relationship with the person who died, a sudden or unexpected loss, or the emergence of what was unaddressed,” she said.

Solaris Cancer Care’s five-week bereavement course is run four times a year in line with the school terms. The course is designed to allow attendees to express and process their experience with grief in a supportive, professionally facilitated group with others who have also experienced loss.

“Death and dying is not part of the conversation as a culture that lives in a fast-paced and exciting world.  Yet, it is part of nature and our natural environment, and talking about death makes us reflect on how we want to live,” said Maureen.

For Elaine, as important as the program itself has been the connections that she has made with other attendees.

“People in the course are on the same journey. While we all have our own personal story, we are all there for the same reason. That helps a lot as we understand each other and what we are all going through,” said Elaine.

There were eight people in Elaine’s group, and after five weeks together, they became friends, to the point where they could call each other for support if they were having a bad day.

The five-week program works in tandem with Solaris’ on-going grief support group – regular meetings where people can share their memories, stories and reflections – as well as individual counselling.

For Elaine, the support services offered by Solaris have made a marked difference.

“I am improving. Of course, there are difficult days, but there is light at the end of the tunnel. And thanks to the course I’m able to enjoy my days and get on with life,” she said.

Since finishing the program, Elaine has begun taking better care of herself, started going to the gym and is enjoying some of her passions again, such as cooking.

Elaine also frequently visits the Solaris Cancer Care centre in Cottesloe for reiki, massage and reflexology treatments which help her to relax.

“It’s a great centre, and Solaris supports every facet of the cancer experience,” she said.

In 2018, Solaris Cancer Care delivered more than 25,000 supportive care interventions to the value $1 million to $1.5 million that are provided for free or at a heavily discounted rate.

This month the charity, which receives no direct government funding launched its May we Thrive campaign to raise funds to maintain and grow levels across its suite of services such as its living with loss program.

As of 1st May, Solaris Cancer Care had an operating deficit of $200,000 forecast and if this trend continues the organisation will have to consider reducing the number of services, which will increase pressure on already stretched mental health services.