Complementary therapies reducing side effects of cancer treatment in WA 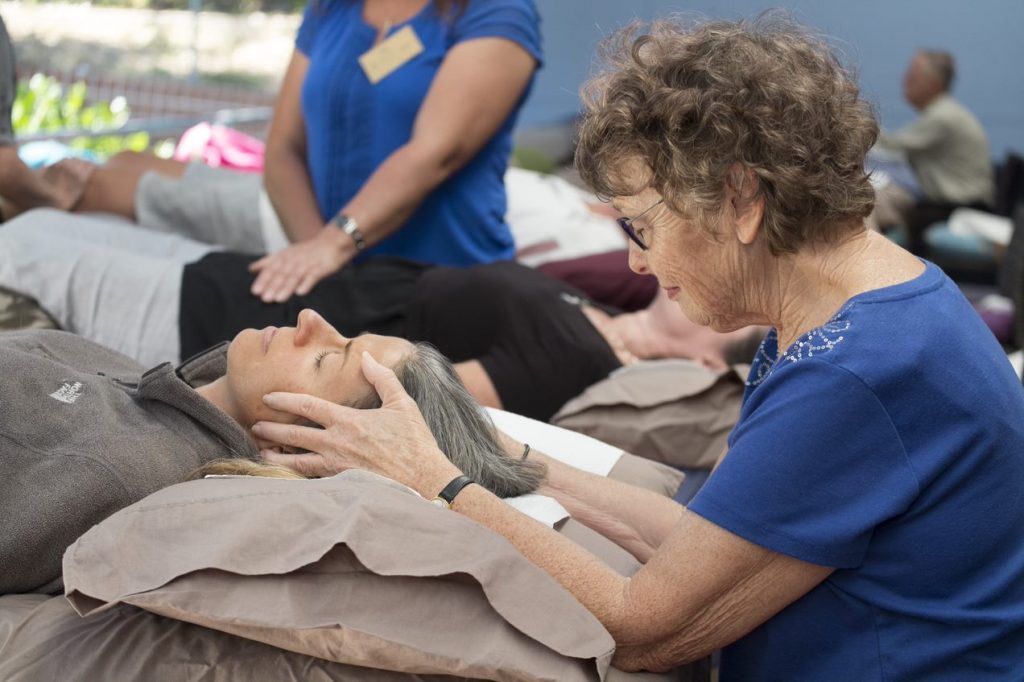 Invasive, debilitating, fatigued, overwhelmed, unable to multitask, forgetful are just some of the words that Judith Barrington uses to describe chemotherapy. Unfortunately for Judi – as she prefers to be called – she’s somewhat of an expert having been on and off the treatment for ovarian cancer since she was diagnosed in 2011.

“I initially went in for a series of operations before receiving my first round of chemo. The cancer came back in 2014 and then again in 2017,” said Judi who still teaches math three days a week.

“I’m now on a maintenance cycle with a lower dosage delivered every four weeks.”

According to the Australian Institute of Health and Welfare, around 130,000 Australians are diagnosed with cancer each year. That equates to 13,000 Western Australians each year or one every seven minutes.

Luckily for Judi, a nurse in the oncology department recommended that she should visit Solaris Cancer Care – a Western Australian charity that supports cancer patients cope with the emotional and physical side effects of their cancer diagnosis, treatment, recovery and palliative care by blending the best in modern medicine with evidence-based complementary therapies.

Complementary therapies are rational and non-invasive. Unlike alternative medicine, they have been subjected to rigorous studies to determine their value, to document the problems they improve, and to define the circumstances under which such therapies are beneficial.

For Judi, these interventions came in the form of massages and more recently reiki. She also found a place where she could feel more positive and be pampered amongst the madness of medical treatment.

“Reiki helps take the edge off things and helps improve my emotional wellbeing. It also allows me to reset and after medical treatment and get ready for the week ahead at work,” continued Judi.

Work done by Solaris and elsewhere has shown that massage, reflexology, reiki among others provide a 14 per cent reduction in side effects such as pain, fatigue and nausea with psychological scores improving by roughly eight per cent per session – reducing stress, anxiety and depression.

Studies have shown that 35 to 60 per cent of adults have used some type of non-conventional treatment or therapy since they were diagnosed with cancer regardless of it was recommended by their physician.

“By recommending nonpharmacologic interventions that reduce symptoms and improve quality of life, we enable patients to play a role in their care. Critical for most patients, this also improves the doctor-patient relationship, the quality of cancer care, and the well-being of patients and their families,” said Professor Joske.

These treatments go hand in hand with counselling and support groups to address the mental as well as the physical side of a patient – even when on the home stretch of their treatment.

Cancer patients can feel isolated because people around them, no matter how loving and helpful, have not faced a similar situation themselves and may find it difficult to deeply understand what they are going through.

“Solaris provides an intermediary step between medical treatment and resuming your normal life.”

While many are surprised that Judi has continued to work during the treatments, she simply says you’ve got to work. Unfortunately, Judi is struggling to continue at the moment, not with the physical reactions but with the mental side effects such as forgetfulness – making her reiki appointments more important than ever.

In 2018, Judi was just one of many who received treatment from Solaris Cancer Care. In fact, the organisation delivered more than 25,000 supportive care interventions to the value $1 million to $1.5 million.

Aside from a handful of core operational staff, these treatments were made possible by a group of 350 dedicated and talented volunteers out of five metropolitan and regional centres in the State.

As most of the Solaris Cancer Care treatments are provided for free or at a heavily discounted rate it gives the opportunity for patients like Judi to take advantage of services that would otherwise be luxuries on their cancer journey.

The charity is the only one of its type in WA, and while delivering massive value to the State, the organisation is independently funded, receiving only a $65,000 WA Cancer & Palliative Care Contract from the West Australian Government with no Federal funding in its 17 years of operation.

Perhaps a reflection of WA’s weakened economics over the past few years, donations have slowed. Yet as Professor Joske knows all too well, the number of patients hasn’t.

“The sobering figure is that for those of us who reach 75, one in three men and one in four women will be given the bad news.

“Cancer doesn’t discriminate, it doesn’t plan ahead, and it certainly doesn’t wait around until the coffers are full,” said Joske.

As of 1st May, Solaris Cancer Care had an operating deficit of $200,000 forecast and if this trend continues the organisation will have to consider reducing the number of services, which will increase pressure on already stretched regional and mental health services.

It’s not the first time that Solaris Cancer Care has had its own health scare. This time last year the charity was staring down the barrel of closing shop in Bunbury a centre that provided over 4,000 treatments in 2018.

Fortunately, the community gathered around Solaris to the tune of over $300,000 in a highly successful fundraising campaign. A similar campaign – May we Thrive – is currently underway calling on generous Western Australian’s who have been touched by cancer to give donations of money and awareness.